The AA Guide to the British Countryside is now out of print. It was a hefty volume; thick spined and well thumbed; a reference book, not a book for carrying in your knapsack as you yomped down shadowed green lanes or across fields towards a distant stile. Yet it celebrated grand attractions and intimate views: from an old tree topped hill fort scarce noticed, to field patterns, to towns, cities or magnificent vistas; it celebrated special places up and down our isles and made places feel special in turn. It was designed no doubt, for long nights poring through its pages, planning roads trips; in reality it was a homage, suffused with a sense of place born of countless years of nature and man weaving their patterns on the land.

One of the glories of the guide was shining a light on the uncelebrated. One such uncelebrated place was the Blithe valley; a short stream, rising east of the Potteries and heading east again and south before joining the Trent. The name is thought to be Old English from gentle, which is perfectly apt; it is only a small river, which meanders lazily and somnolently through its willow lined valley, wet meadows and hedgerow still persist . The Guide, rather understatedly, described it as “the quintessential English country scene”.

It was mistaken though: the quintessential English scene is next door;  the next stream draining into the Trent watershed heading east, the Swarbourne, is more hidden, and quite different in character but equally everyday, equally unnoteworthy, so much so that like the many scenes like this, we take it for granted. The Swarbourn is a river of only 10 miles from source to confluence. Rising in the ancient Needwood Forest, unlike most streams, its valley is tightly bound through both its upper and middle reaches; it has more purpose, directness, yet remains humble.

The source is a hidden spring amongst trees and leaf litter. Its foot, where it quietly merges with the Trent, you would hardly notice: there is a water meadow, bowing grasses and stately, tall reeds and then it is gone; only the Swans, surfing the short rapids here notice its influence. Between is the valley. Whilst it is narrow and steep sided it is not soaring. Cloaked with rich and varied woodlands in a patena of greens and browns; narrow paths snaking up through dappled shade, the verticality is emphasised, but it is a show. Lower down, the floor of the valley leads the eye on to a close perspective, shortening distance with softening trees and sharpened at its edges by unruly hedgerows of hawthorn and beech, reaching out into the road, brushing legs. Oaks, sporadically planted in the hedge, mark boundaries, overlooked corners, intimate meeting places. The river is never far away. Bridges here are simple affairs and now more beautiful because of it; low walled, flaking brick and stone; the arches unseen, easily filled by rising flow.  Fords are common too, with rutted lanes bouncing down to the rippling, running water, faster flowing over the drift-line.

In places the valley opens up just a little; but here the views explode out: a distant Church tower, a stand of brooding Scots Pine waiting to be climbed, a whale-backed field with the slow shifting spots of black & white cows; nearer to is an old cornmill, with apple trees dangling long arms over a speckled green pond, before squeezing in again, cramming the landscape back into a postcard window. The valley is its own world; longitudinal, like stops on the line.

Over the holiday I read Wildwood by Roger Deakin. It is his quiet celebration of a life spent with trees; learning their ways, being amongst them; using their fruit, and in their second life, their timber, their tinder. What is striking is not just how different one species of tree is from the next, but how each tree is an individual: its burrs, its knots, its shape, its bifurcations; down to the separate world that lives deep within the folds and knurls of the bark itself; each in a way as a separate from one another as our cities; distinct but unique, able to communicate, an interdependency of richness. It is both an uplifting read and a soul-stirring one. As the story of our lost ancient woodland unfurls, as the realization of how much has fallen under man’s saw, then it takes on a haunting, elegiac quality; not in morose prose but in accenting the profoundness of our loss.

This week I was uplifted by trees though. Driving through the weaving, wandering, looping lanes of Herefordshire, one minute I would be surprised by the forceful push of large lorry wafting along a road built for carts, the next confronted by a green verge running along the road’s centre, high banked hedges and overtopping trees, their outermost leaves gently dangling and waving above your head. I had forgotten how that land is defined by short, steep hills, fields that pitch and flow into the distance and stands of ancient trees; uneven in height as the eye pans across them; uneven too in shape, colour, form. Trunks of brown; deep greens and grey; and, even at the start of Autumn, abundantly, vigourously plump with life, sap, fruity vitality.

Just outside Ledbury, heading west, is apple tree land. The trees follow the natural contours of the land, planted years ago in immeasurable stands forming today’s superficially boundless orchards. The apple seems a proud tree, rounded in form yet spiky close to; planted en mass yet independent, shapely, interesting to the eye. This year, apparently, has been a bad year for wasps and a good year for fruit. So it seems; trees lining the roads hang saggily under the weight of a large and ebullient crop; dessert apple in size; preening themselves with red-robin bellies to the sun. Earlier I had drunk some farm-pressed apple juice; it was rich, fat and delicious; now I looked forward to the fermented version from these same apples.

Later that evening, I inspected my hops. They’re ornamental not for brewing, but they snake and bind pleasingly through a corner of my garden; bullying some plants, clinging on to others, finding holes in my fence where knots have fallen out, and pushing through, looking for the sun. The cones are just passing their best but are still lime green and resinous, almost to the point of dripping their oils. Some I will dry; others I will put in the house for the aromas; most will be cut back in waiting for next year’s hop shoots and riotous cycle of growth.

The apple-hop connection was only made later when a former colleague, Jo, posted some pictures of a Ledbury hop farm onto facebook. She had been to the farm the same day as I had been gazing on the apples and to watch their harvest; the bines twelve to eighteen foot; broad leaves like maples and dark, fleshy cones in bunches like a prize fighters fist. Most cones are stripped from the bines on a heath robinson contraption that cycles a hook round and round at head height; the bines dangle like a freshly butchered carcass before being sifted and sorted by hand and laid out like a thick pile carpet to dry. Like the fat apples, they spoke of spicy, citrusy, earthy beers to come; I licked my lips in anticipation.

For many, and for many a long year for me, cider and beer are like cats and dogs: you are a ‘beer man’ or a ‘cider man’; the fruit or the grain; the press or the boil. But nature doesn’t see it that way. In this thick tilled soil, on those rolling hills, both are at home; growing, ripening with the passing of the sun; blossoming richly in time for harvest and to sustain us all. 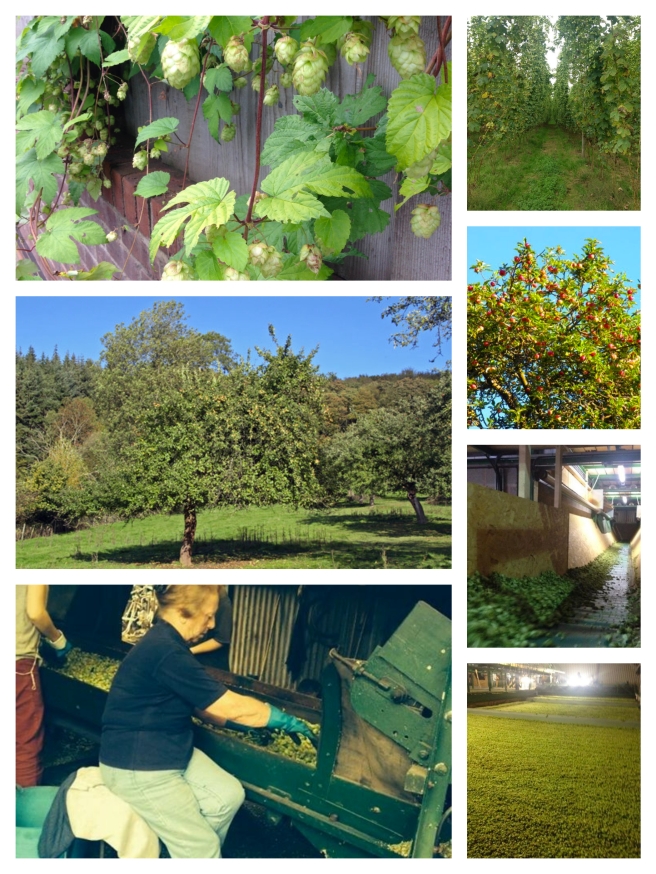