II
Then the diggers came.
Scraped the grass off, ripped away the top soil
Murdered the fields, raped the trees
Millennia old, gone, in a piping whistle
Trill, unheard, silent screams
Heard by millions, but not us

III
Then the bulldozers came
Harsh; spewing; yellow; alarming
Their curved shields, pushed by ten thousand horses
A curving arc of land, my land, rising, gone
In a bow wave of sand, and soil, and grit
Dust, fumes, pain, hurt

IV
Deeper they pushed.
At first three feet, then six
The water rose, gritty, dirty, seeping
Then three fathoms, then six
For what?
For gravel, for roads, for the building blocks of progress

V
But to no avail, we will lose, will man
Soon the ice will come again
Not long now, the glaciers
When the Stream turns, the cold will come again
Ice; harsh, gliding, white, crunching, rock-armed
Its curved shield, pushed by a million years
Will cleanse the land again of us
In a bow wave of sand, and soil, and grit, and man

My “Summer of Love”, ha! ’91?
Hardly ’67; capitalism had won
Thatcher’s decade just over, but still Blue
Prospects positive, nerves shredded, no clue
What was to come.
We fired up the Polo with the wonky exhaust
Loaded in ourselves, tents, made course
Down the ’38, over glistening Tamar
To Kernow, through Saltash and a-far.
The tape cassette whined all the way.
Anthropomorphic dance moves
Upper body whirled, feet glued
To the bass line of ‘Flower’ and ‘White Shirt’
No pogoing but still my back hurt
The next morning; I’d slept all rucked up
Dark eyes, small, bleary and shot
Peered out at the world from a blue hooded top
In the days when ‘brunch’ simply meant
You’d been up late and were spent,
Pasties for breakfast; dive-bombing seagulls.

It always seems to be the 7:53
That pauses, downs tools, at Rugby
Along one spur in that early morning sun
Lies Long Buckby, Places Unmentionable, Northampton
But I wait on the carriage with my fellow cattle
Crammed in, stacked up, unable to settle
For all stations to Milton Keynes
Kings Langley, or change for Apsley Guise
And what a hive of buzzing insanity
This longitudinal world, rich with humanity
A cross section of all walks of life
Blazered school kids, striped business-men, portly wives
One old chap, short sighted, I’d wager
Reads the column inches of the sports pages
Right up close, with his half-moons perched on his for’ead
And his armpits humming like a spluttering moped
Two ladies, more girls really
Swap make up tips; though the hour is early
Blink on eye liner, duskiness and kohl
Even through Stephenson’s 3 mile smoke hole
And despite the carriage yawing, despite the crush
Lipstick’s applied with a badger-hair brush
Mr Noisy, puts the world to rights
Preaching to the unconverted in the barely light
Works in Westminster for an NGO
But his opinions are those of my morning Metro
I pity the bloke who reads the script
For the buffet car, disengaged, slightly miffed
Or is it just his Mancunian tones
Spoken through a nose, all hair, snot and bone
“A selection of bacon rolls, croy-sants, hot drinks
Cash only please, our machine’s on the blink“

They stripped the trees for fuel those men
For warmth against the whipping, sand-armed winds
Brine-filled, little could grow above a sapling
Yet still they cleared, cut, split
Oblivious to their future
Straight poles for the roof and rafters
Turf topped, thick walled, their beast lived with them
They traded in copper and tin along superhighways
Westward, today we feel remote
Galleys of the Med; longships from the north
Curragh to their cousins in Ennor, over vicious seas.
What of them today?
Their village, long abandoned, leaves only mysteries
The sea is higher now, the wind blows colder
Where they saw land, we see rocky stumps
Where they saw crops, we see gorse
Where they saw hills, we see tors
Where they saw woods, we see a single tree
Combed over, brushed across,
Stunted windward, flared leeward
Shaped by forces aeolian, clues to their passing 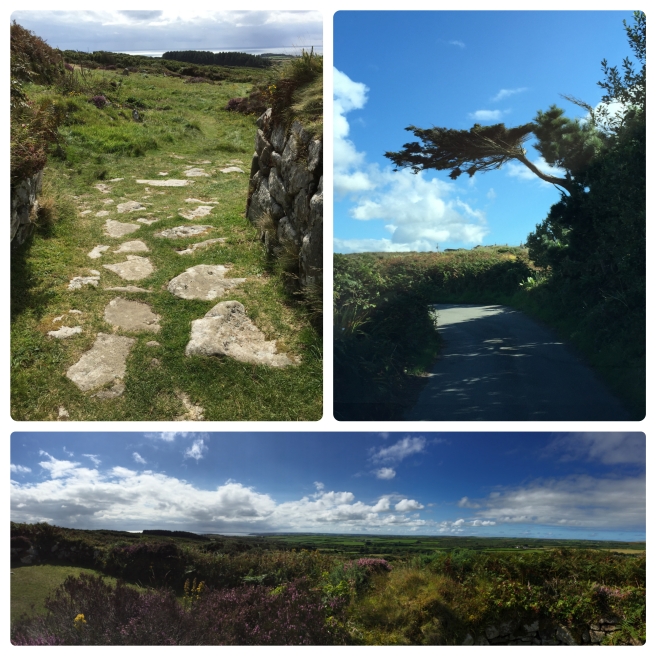